When the interactive, park-exclusive wands for Universal Studios: Wizarding World of Harry Potter were revealed, did you get a feeling that they looked familiar? If so, you're absolutely right! Each interactive wand is actually a combination of existing character wands.

On this page of the Wandmaker's Notebook, we'll identify which character wands were blended together to create the 13 interactive wands. Some are near copies or re-colors, and others are hybrids. Is there even a single design among them that we can truly call "original?" (Spoiler: sort of)

The Birch wand is a straight copy/paste job from the handle of George Weasley's wand and the shaft of the Death Eater Skull wand.

The Rowan wand's handle is almost identical to the Death Eater Skull wand, but recolored. Likewise, the shaft is a recolored version of Fleur Delacour's wand, favoring a warm mahogany brown over the subtle two-tone color scheme of the original.

The handle of Umbridge's wand is slightly recolored to charcoal brown, almost black. The shaft of Fleur's wand gets a similar recolor.

The Alder wand's handle is a near copy of the Death Eater Snake wand. The original has a piece connecting the skeleton's chest and mouth, but this piece isn't present on the Alder wand (probably to make it less fragile). The skeleton on the Alder wand is recolored to match the snake. The shaft comes from Cho Chang's wand.

The handle of the Willow wand is somewhat similar to Dean Thomas's wand, but it is actually copied from Barty Crouch Jr's wand, which isn't available as a Noble Collection replica. (It can be seen in actor David Tennant's hand in a behind-the-scenes production photo.) The design of this handle is featured in the Goblet of Fire section in the book The Art of Wand Work. The Willow's shaft comes from Fenrir Greyback's wand.

Because the handle of this wand is never seen on film, the willow wand is one of the few I'd call "original," in spite of its similarity to Dean's design.

Lavender Brown and Seamus Finnigan have very similar wands - though the black band pattern and color scheme are different, the shape is the same. It is this shape that the handle of the Hawthorn wand is copied from. The shaft is a generic black-with-white-tip design that (to my knowledge) doesn't come from any known character's wand.

The Oak wand is a recolored, long version of Fenrir Greyback's wand. 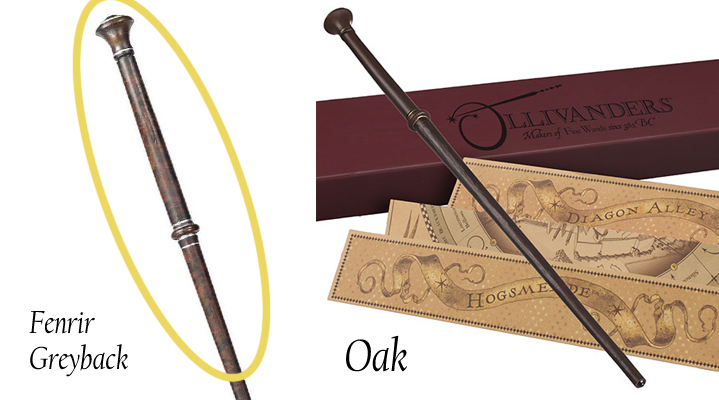 The handle of George Weasley's wand makes another appearance. The shaft comes from that of Cho's wand, and is slightly recolored.

The handle of the Hazel wand doesn't come from any known character's wand. However, it's not a new design - it can be found among the many generic wands on display at the Harry Potter Studio Tour in London. Like the Willow wand, the shaft comes from Fenrir Greyback's wand. Of all the interactive wands, this is one of the few I'd consider calling "original."

Umbridge's wand makes its second appearance as the handle of the Vine wand. The shaft is the same generic black-with-white-tip design that appears on the Hawthorn wand. 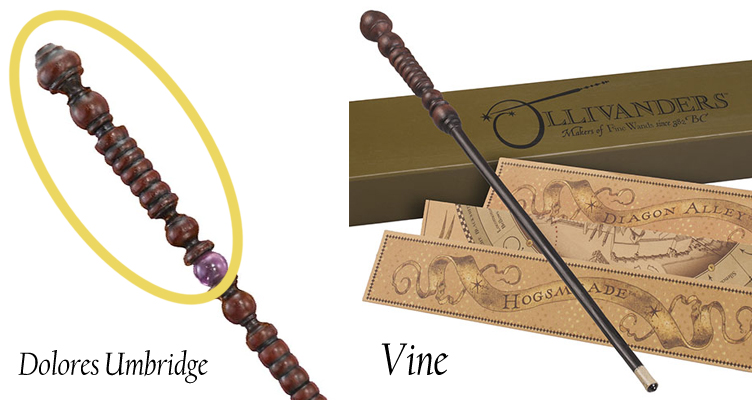 The handle of the Ivy wand is based on Karkaroff's wand, which is not available as a Noble Collection replica, and can only be seen as concept art on Pottermore. The shaft is a hybrid of the hazel wand's handle donor (see photo above) and Cedric's gradient tip. This is another interactive wand whose design I'd possibly call "original," since Karkaroff's wand is never seen on film.

George Weasley's wand makes its third appearance, this time pairing with the shaft of Fleur's wand, which is once again slightly recolored.

The Elder interactive wand is basically a recolor of the Death Eater Skull wand - handle, shaft, and all. The main difference in the shape of the two wands is a slight bulge in the skull's eye sockets.

There we have it! While there are a few designs that are nearly original (Willow, Ivy, and Hazel), all of the Universal Studios: Wizarding World of Harry Potter interactive wands can be traced back to existing character wands.

Which interactive wand is your favorite? Which combination surprised you the most?

See you on the next page,
Maranda

The photos of the interactive wands were sourced from Universal Orlando's online shop.

July 27, 2019
Wand design is a key part of the Wizarding World's visual worldbuilding, from the redesigns in  Prisoner of Azkaban to the 1920s wands of Fantastic Beasts . On this page of the Wandmaker's Notebook, we'll look at how the wands have evolved over time, and explore the role artists and prop makers play in this evolution.
6 comments
Read more

February 19, 2019
Thinking about designing your own wand? On this page of the notebook I've compiled 11 tips to help you create the perfect design.
2 comments
Read more