Wands in real life: The magic powers of the conductor's baton

Conducting an orchestra is probably the closest thing you can get to magic in the real world.

It's a bold assertion, but I'm actually studying to become an orchestra conductor so I'm not saying this just to say it.  I still have a lot to learn, but even at this early stage in my journey I've noticed the similarities between conducting and magic, least of all is the wand-like object with which the conductor is usually seen - the baton.


“Ah, music,” Dumbledore said, wiping his eyes. “A magic beyond all we do here!”

With a baton in hand, it seems as if the orchestra conductor can make magic - er, I mean, music - happen without saying a word - he waves his arms, and the musicians play. He stops, they stop. Of course, just as Harry Potter discovered at Hogwarts that magic is much more than waving one's wand and saying a few funny words, the art of conducting is more than standing up in front of an orchestra and waving a stick, through the results may be just as magical.

The baton: what is it? Examining its form

This is a typical conductor's baton. It has a handle of dark hardwood (rosewood, in this case, though other woods and materials like acrylic or cork are used as well) and a straight shaft of painted white wood, fiberglass, or carbon fiber, gradually tapered to a thin tip. Length typically ranges from 12 to 16 inches. The balance lies close to the junction where the handle meets the shaft, though different conductors will have different preferences with regard to the balance point.

Materials, length, and balance are also a matter of preference to the point where a conductor might select one baton over another for use with a particular piece or style of music. Perhaps a shorter wood baton for a light Haydn symphony, or a longer fiberglass/acrylic for Mahler's second symphony (which calls for 100+ orchestra members and a large chorus on top of that!). There is as much variation as there are conductors. Now, let's see how a baton is actually used to make the magic happen.


"Conducting is the only evidence I've ever had that telepathy does exist. And I think the best conductors are really telepathic."

The purpose of the conductor's baton


In the wizarding world, wandless magic is not impossible. Similarly, a baton is not required to conduct. In fact, choral conductors often lead their singers without one, and orchestral conductors might sometimes choose to forego the stick entirely, depending on the music:


If the baton is not required, then what is is for? The short answer: just as a wand channels and focuses a wizard's magic, a baton facilitates the conductor's job of communicating with the orchestra, providing a point of focus for his or her gestures, and magnifying these gestures so they are more easily seen by all players. We can see, then, that for a piece like the Adagio for Strings above, foregoing the baton allows more detailed, intimate gestures that communicate the nuance of the music to the players.

This communication is where the magic happens. Understanding what the conductor actually does will show us how.


What does a conductor do?

The concert hall is full, the lights dim. The dulcet tones of the oboe pierces through the hall, signalling the musicians to tune their instruments. A moment of silence - then out walks the conductor (to much applause). He steps on to the podium, all eyes watching him intently. Baton in hand, he raises his arms and the musicians raise their instruments obediently, as if under a spell...he brings them down and 50 bows zig-zag in unison - DUN DUN DUN DUUUUNNNN. Beethoven's Fifth.

The conductor does not tell the orchestra what notes to play; he* is not drawing the music in the air. (The notes themselves are written on the players' sheet music.) No, the conductor is responsible for much more than that. Before he gets up in front of the orchestra for the first rehearsal, he studies the music and makes decisions about the mood, the character, the interpretation, the speed, and a host of other factors.


"[Conducting] technique is communication: the two words are synonymous in conductors."

Once he steps on the podium, his job is then to communicate those decisions via non-verbal gestures to the musicians in order to create a unified performance: every single musician must be on the same page about how the music should feel and sound. A good orchestra will see these gestures and adjust their playing accordingly. Throughout the rehearsal process, the conductor will reinforce his gestures with some verbal instructions or explanations but on the whole, does not do a lot of talking. Come concert day, the rehearsal process over, the majority of his work is already done.

*I use male pronouns here simply to facilitate ease of reading and because - let's face it - the majority of conductors are male. Of course, being a woman and an aspiring conductor myself, female conductors do exist and are growing more numerous by the day.


Watch as Simon Rattle conducts student orchestras in Grieg's Hall of the Mountain King. Look at how his gestures communicate his ideas about the character of the music and how he responds dynamically to what the students are (or aren't) doing.


The baton magnifies and focuses the conductor's gestures so that they are easily seen and interpreted by all the players, even the ones sitting as far as 10 meters away in the back. This is why the shaft of the modern-day baton is white - it contrasts nicely against black suits and dark concert halls. Just take another look at the photo of Alan Gilbert above, or any of the videos, to see for yourself. But batons did not always look the way they do today. Before Gustav Mahler dimmed the lights in the concert hall, dark-colored sticks were commonly used. In fact...they looked like wands!

A (brief) history of conducting


Conductors weren't always present. Back in the 1700s, in the time of Haydn and Mozart, orchestras were led by the concertmaster - the leader of the violins - or from the keyboard. There was nobody waving a stick. 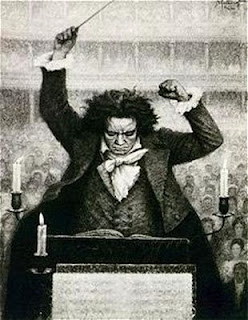 In the mid to late-1700s, as orchestral personnel grew in number, it became necessary to beat time in order to coordinate the musicians. One person would bang a staff against the floor at a steady tempo, much like a metronome (French composer Jean-Baptiste Lully hit his toe with his and died when it got infected). By the end of the century this practice evolved into simply waving a stick in the air at the right tempo, shifting from an intrusive audio cue to a purely visual one.

The following century saw music grow in complexity, the invention of new instruments, and the doubling of orchestras in size. By the time Beethoven (shown above-left) arrived on the scene, whose "Ode to Joy" Symphony calls for a chorus and four vocal soloists in addition to the orchestra, it was absolutely necessary for one man to call the musical shots. It became standard for him to make the final decisions for all matters of musical interpretation.

A look at some historical batons


Below are some photos of batons that were used by conductors through history (and others that were purely commemorative). Contrary to the sleek modern white shaft and and bulb handle, these batons really look like wands! The dark-colored batons were used before dimming the concert hall became common practice.


Magic in the wizarding world doesn't come from the wand, but from the wizard. The wand simply channels the energy. The conductor's baton functions in the same way - simply waving a baton does not a conductor make!

I hope you enjoyed this look at real life wands. Which of the historical batons is your favorite? Let me know if you want to see more posts like this, and I'll see you on the next page of the Wandmaker's Notebook!

Add to the discussion! Please keep things respectful and appropriate.

July 27, 2019
Wand design is a key part of the Wizarding World's visual worldbuilding, from the redesigns in  Prisoner of Azkaban to the 1920s wands of Fantastic Beasts . On this page of the Wandmaker's Notebook, we'll look at how the wands have evolved over time, and explore the role artists and prop makers play in this evolution.
7 comments
Read more

February 19, 2019
Thinking about designing your own wand? On this page of the notebook I've compiled 11 tips to help you create the perfect design.
2 comments
Read more

March 17, 2019
When the interactive, park-exclusive wands for Universal Studios: Wizarding World of Harry Potter were revealed, did you get a feeling that they looked familiar? If so, you're absolutely right! Each interactive wand is actually a combination of existing character wands.
Post a Comment
Read more